This article is based on a lecture given by Mark Banham of Shabden Park Farm, at the AGM of the Chipstead Village Preservation Society in the Peter Aubertin Hall on 12 June 2012. 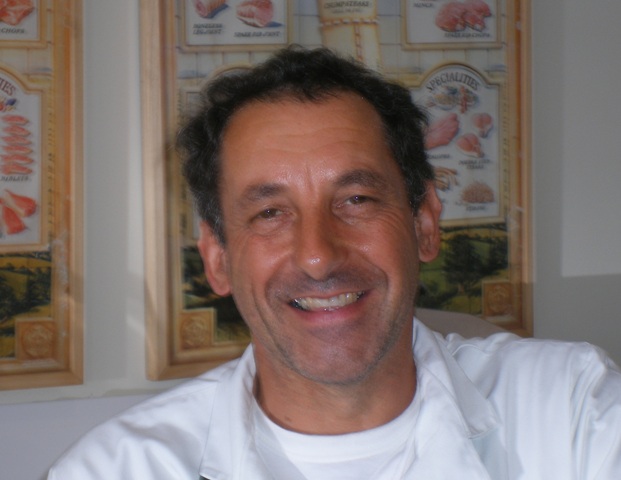 Shabden Park Farm, before Mark and his wife Kirstie arrived, consisted of 263 acres of Green Belt farmland owned by the Surrey County Council, who wanted a tenant to reinstate it as a traditional Downland Chalk farm, rearing livestock. Previously the farm had been arable land since the last war with the majority of the land in a "set aside" scheme. There were no farm buildings or stock fencing, only a small cottage to live in. Mark was selected from over 200 applicants and took over in 1995 bringing with him a flock of 250 breeding ewes. 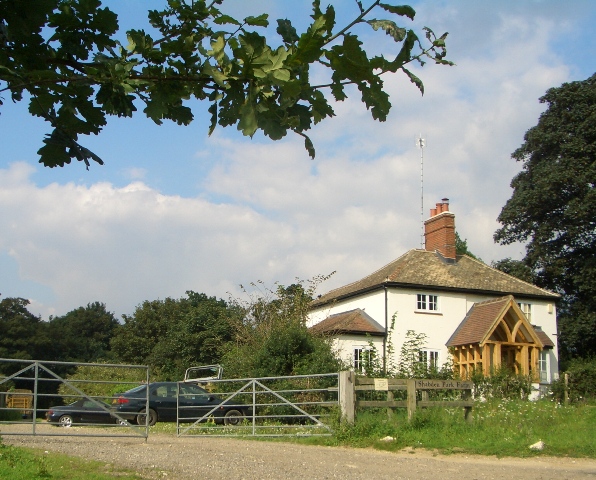 Mark set about modernising the property and re- instating the fields with appropriate fencing and gates, and installed a water supply to all the fields. He entered the farm into the CSS- 10 year scheme, restoring landscapes and habitats that had been damaged by previous intense farming. Surrey CC had new livestock buildings installed. 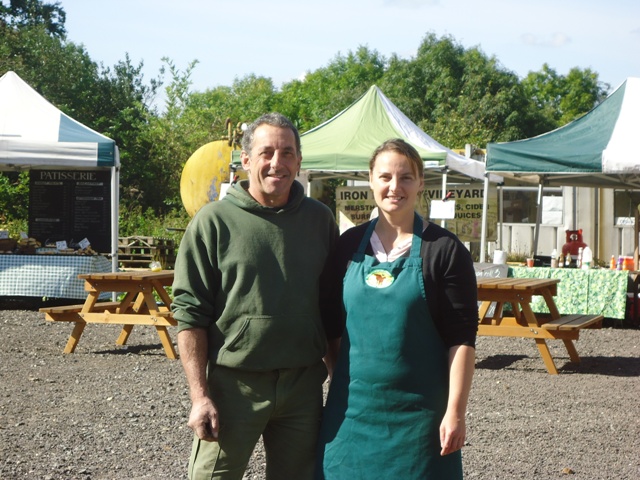 Mark and Kirstie at the Shabden Park Farm open day

Mark then had the difficult task of re-planting 111 acres, and later a further 66, with a seed grass specific for the chalky terrain. This took 3 seedings before a satisfactory growth appeared, all costing £100 per acre, out of his own pocket! He also re-planted the land with the appropriate wild flowers and so re-introducing butterflies and song birds. All this had to be done without any artificial fertilisers or pesticides.

Many changes have happened to farming over the last 50 years or so, with cheap imports of meat and vegetables, the advent of supermarkets driving down prices, and most seriously food scares such as BSE, "Foot and mouth" disease, E. Coli and salmonella. Farms have had to either diversify, enlarge, or reduce costs to make both ends meet. 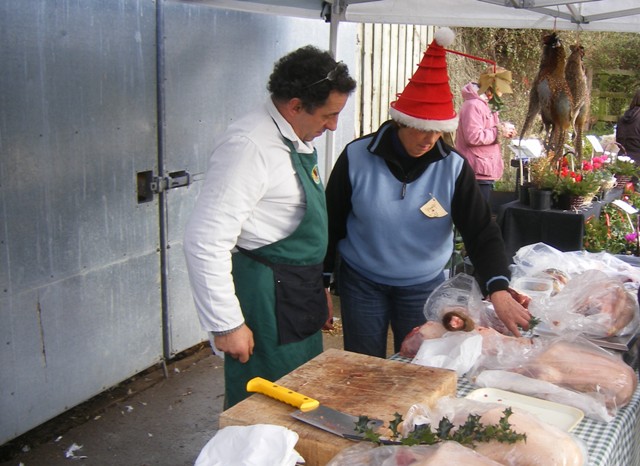 Meat and poultry for sale at the Shabden Park Farm shop

In  2004 Mark and his wife Kirstie decided to sell their meat directly to the public at their farm shop, marketing under the brand of a "Back to Nature" farm. In 2005 they started   their beef herd of Sussex cattle, selected for their taste and an appropriate farming system.  They reduced the risks of infection by using a local abattoir, which minimises the distance the animals and meat have to travel. They employed a part time butcher and  built a cold store and a cutting room. They started selling their meat at other farmers markets and in London, as well as having their own Farmers Market on the last Saturday of the month. In 2005 they had their first flocks of turkeys and geese for Christmas as well as having a festive Christmas Market, all of which were successful enterprises. 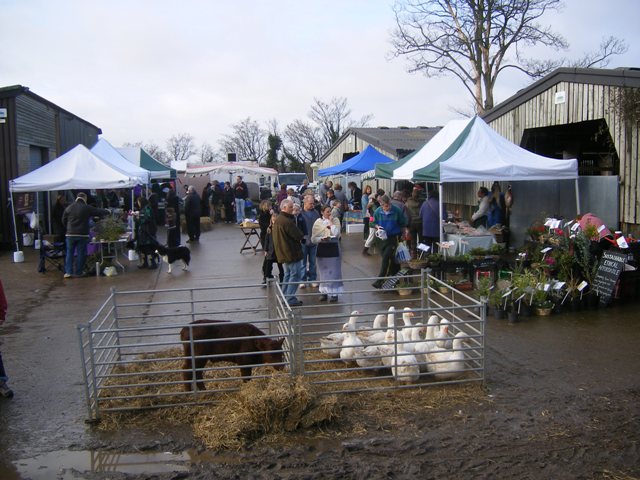 Two years later they started breeding Tamworth pigs and got a new purpose built butchers shop which was open much of the time and employed a full time butcher, Martin, who lives locally. The farm now supports the family of four and sells all its meat through the farm shop. They rely on a regular customer base, mainly of local residents and including the White Hart pub restaurant. Customers enyoy the quality of their produce and the knowledge that it is all locally reared. 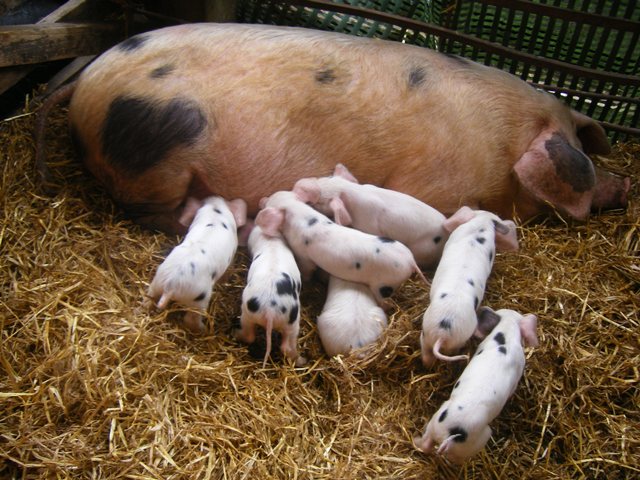 The other way that they have diversified is by laying on an education system to teach people about the countryside and farming. Kirstie has done a course on these subjects and now  gives regular teaching  sessions to local schools and the Cubs and Brownies, where the children get to meet the animals and learn about the intricacies of butchery, including how to make good sausages! They also hold Open Days with Sheepdog Trials, demonstrations of sheep shearing, lambing, calving and traditional hedge laying as well as general education on the countryside and how to appreciate it as well as advice about using the footpaths and the control of dogs. 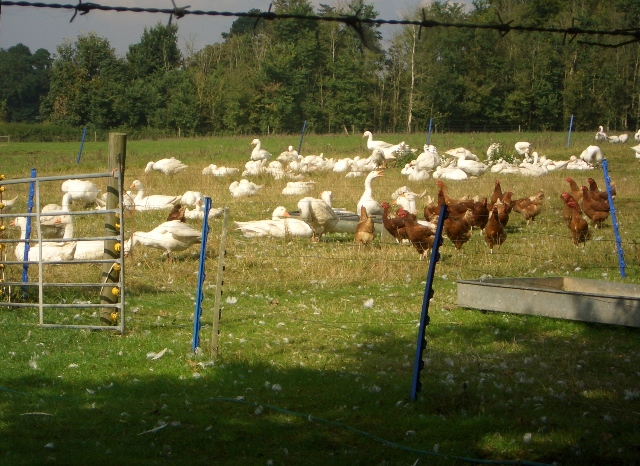 Geese and hens enjoying the sun 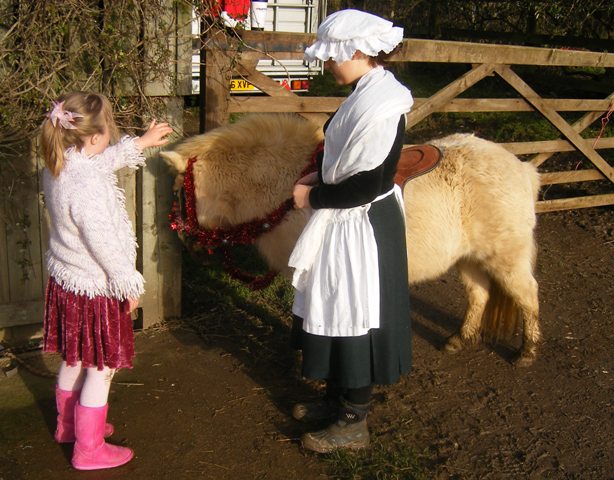 Mark finished up by emphasising his lifelong passion for farming and natural history, the satisfaction of family life on a farm and fitting into the local community by providing good countryside products and pursuits. Finally, the fulfilment he gets from creating something with his own hands which future generations of Chipstead residents will appreciate and hopefully cherish.