An historical reflection on Chipstead by Rupert Courtenay-Evans

Looking back over the last 200 odd years of Chipstead’s history, I noticed how many interesting and important events seemed to have happened around the turn of the centuries, and thought I would try to summarize some of them in this article.

In 1788 William Jolliffe, a rich and ambitious MP from Petersfield, became the owner of the large Tattersall estate at a cost of £40,000 (present value £6 million). This held the Manors of Chipstead, Merstham, Albury and Chaldon, and much land and property, which included 11 farms and one Public House in the parish of Chipstead. However, it did not include the prestigious Shabden Estate, which was owned by John Fanshawe who had been previously outbid by Jolliffe at the Tattersall estate auction, and had little love for Jolliffe. 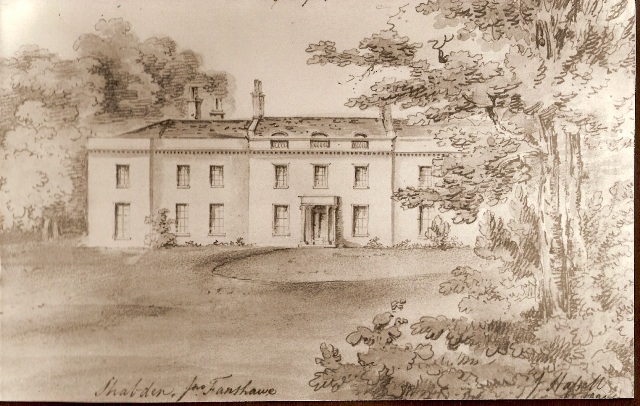 Jolliffe was an “improving” and contentious landlord, who was advised that if he reduced his rents and paid the “poor rate” himself (a Parochial Benefit - see the original wooden notice-board of 1785 in the Rector’s vestry in St. Margaret’s Church), he would also be able to justify reducing this cost. However, this would mean he had to get his own tenants elected as “conscientious” Church Wardens and Overseers of the Poor. He set about replacing many of the existing tenants with his own men, some of whom had not previously even lived in the parish, and allowed them a considerably lower rent. This manoeuvre, he hoped, would give him a majority on the Vestry Council, (the predecessor to the PCC), and thus he could appoint his own officers.

This was put to the test at Easter 1790 when the Vestry Council met under the auspices of the Rector, the Rev. John Griffiths, another controversial person. Fanshawe and his solicitor were there and Jolliffe took all his new tenants along, insisting they had a right to vote. By one vote, Jolliffe managed to oust the incumbent officers, who were Elias Lew of Elmore Pond farm, Simon Rose of “The Star” in Hooley Lane, Edward Cuffley of Eyhurst farm and John Butt of the “White Harte” pub, and replace them with his own little known men. After doing this they all left and then the remaining members quickly reversed this decision! This, as can be imagined, did not deter Jolliffe, who took the case to the Quarterly Sessions, over which he co-presided and unsurprisingly it was overturned. Fanshawe then referred it back to another Sessions presided over by another judge who reversed Jolliffe’s decision again! Jolliffe never succeeded in getting his men elected.

Fanshawe then charged Jollife with acting illegally at the first Sessions. Jolliffe responded in writing, causing Fanshawe to bring charges of libel against him. In 1791 Jolliffe was convicted and sent to prison for 6 months and fined £100.

Jolliffe was so upset by the Chipstead folk, especially Fanshawe, whom he said “spread every possible report injurious to his character with industry” that he decided not to live in the village but to build a new manor house in Merstham, “The Great House”, between Quality Street and Gatton Bottom. This house became Merstham House which was eventually pulled down after the Second World War. Perhaps, had  Jolliffe got on better with his new Chipstead neighbours and tenants, and been less aggressive in his dealings with them, all this litigation might not have occurred and he and his descendants might have settled in Chipstead, and still be there today? 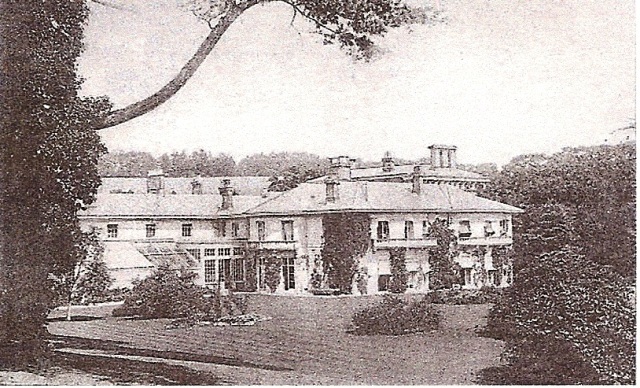 Even worse for him, because of this conviction, he was excluded from inheriting his wife’s family title, which would have made him Sir William Hylton Jolliffe (Bart). Jolliffe’s bad luck persisted when he sadly died after falling down his wine cellar steps in 1802. The family had to wait two more generations until the baronetcy was passed to his grandson, Lt. Sir William Hylton Jolliffe in 1821, who was later made a peer in 1866 after a very successful political career. The Hylton family have remained Lord of the Manors of Chipstead and Merstham ever since and had the patronage to appoint the Rectors of St Margarets until 1936, though their local input now seems minimal.  They still own considerable large areas of land in Chipstead, including the fields of Leyfield farm with its mediaeval barns off Elmore Road, which have recently been converted into desirable and expensive residences.

Another well known event that touched Chipstead was the opening of the extension of the Surrey Iron Railway (SIR) from Croydon to the Merstham limeworks in Quarry Dean in 1805, which was owned, of course, by Jolliffe. The SIR skirted the then Eastern parish boundary in the Millstock fields in Hooley Lane (now Brighton Rd). This was then a novel ground breaking form of transport, the first in the world to run a considerable distance (from Wandsworth on the Thames), and which allowed one horse to pull a load of over 50 tons along rails on a largely levelled contour and was destined to last until 1837 when the arrival of the steam railway made it redundant. 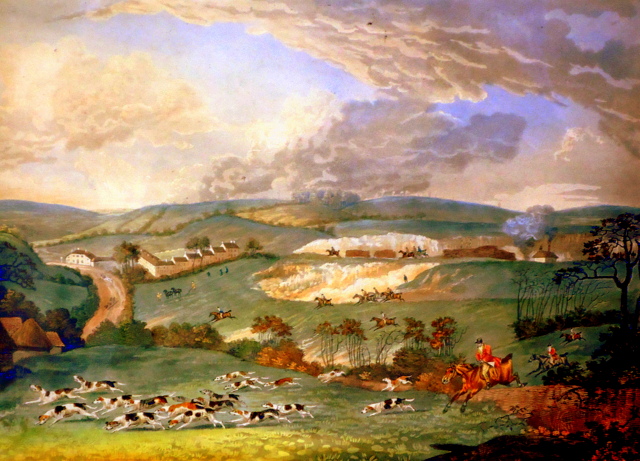 A painting of the Jolliffe hunt at Merstham in 1824, looking north across the Brighton road. The stone quarries, chalk pits and limeworks can be seen in the background, together with the worker’s cottages. The east-west ridge bisecting the quarries carried the Surrey Iron Railway.

The really significant event of this era was the arrival of Rev. Peter Aubertin in 1808, after the previous Rector, John Griffiths died, having been incumbent for 55 years. Griffiths had also been Rector of Sanderstead, where he had lived until 1778, and it seems that he only visited Chipstead when he felt it was necessary which was not frequently.  He left the church in somewhat disarray, with its tumble down south transept and the neglected interior given over in summer to being a cricket changing room, etc.

However, with the coming of Rev Peter Aubertin, a lot was soon to change; he was a man of wealth, energy and dedication. Coming from Huguenot stock, his father having been naturalised British in 1760. Peter Aubertin immediately set about restoring the Old Rectory in Mugswell and the Church itself as well as holding regular services and meetings. This restoration continued for the next 81 years with a combined “father and son” incumbency and major changes, such as a rebuilt south transept, an additional north aisle, a new organ and casing, new pews and a beautiful new east window made of antique stained glass. These changes were made by the end of the 19th century, when sadly the younger Peter Aubertin had to retire from ill health in 1889. 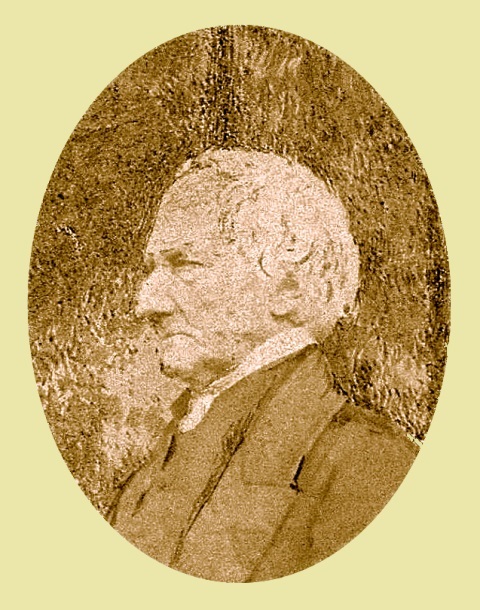 This conveniently brings me to the 20th century, which brings not only a controversial new rector but also the arrival of the railway to Chipstead in 1898, not to mention a new monarch after 64 years; these latter two events brought the “heyday” of Chipstead’s long existence.

In 1889, the Rev Charles Gordon Young arrived in Chipstead from St Judes Church, in the Queen’s Park Housing Estate in West London. He was recently married and had made his name at Queen’s Park as being one of the founding members of the newly formed football club, Queen’s Park Rangers. It was his playing as well as his diplomatic skills that had facilitated the amalgamation of two local parish football clubs to form the formidable QPR club in 1886. Rev. Young came from a Yorkshire working class background, very different from that of the Aubertins, and it seems he found life in Chipstead rather dull as in those days it was a really isolated rural village. Thus he used to go up to London and help with pastoral and sporting matters there in some of the more deprived parishes; he also used to play cricket and soccer in Chipstead as well as being very sociable with the gentry. His Church Warden said he delivered clever sermons, his services were well conducted, he was a successful fund raiser for the Church and his only possible fault was his efforts to be “all things to all men” 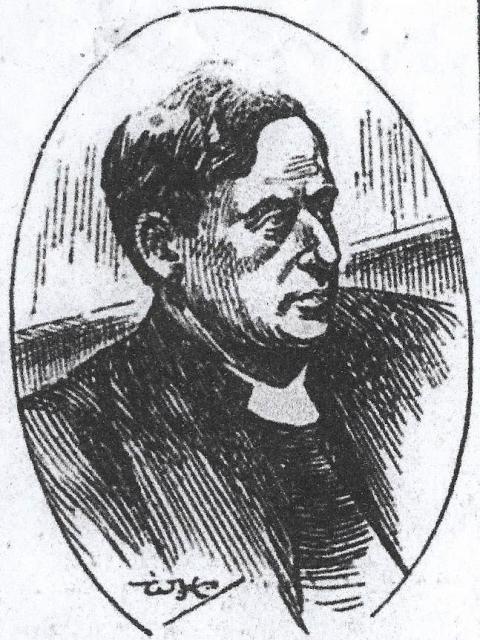 Sadly, it appears that alcohol began to get the better of him, both at social occasions and on the cricket pitch, where he was alleged to “roll around on the ground” when he was meant to be bowling and to “stand in front of the wickets” when he was meant to be wicket keeper! However, what was worse is that he was observed to frequent shady night clubs in London, where it was alleged he behaved in “an immoral and riotous way”. The villagers took him to the Diocesan Court and in November 1901, he was found guilty of “drunkenness on several occasions and of indulgence in immoral conduct, dangerous to the reputation and unworthy of the character of ministers of religion” Such a sad ending to a ministry with such a promising start. We know nothing about his subsequent life.

During this period the Tattenham Corner line came to the “Chipstead & Banstead Downs” station first in 1899, not that this would have been used much by Rev. Young to get to London as then the Rectory was in Mugswell nearer Reigate station. This line was the brain child of Sir Henry Cosmo-Bonsor, a rich city financier who owned a large estate in Kingswood Warren. He also became the chairman of the South East Railway company and to enhance the value of his property, he persuaded his fellow directors to agree to the construction of a railway from Purley Junction to Tattenham Corner. As a result, the population of Chipstead increased from 640 to 880 in 10 years. Previously the village had largely been at Mugswell with some large estates along the line of the High Road, with small scattered farms and workers cottages in the vicinity of the White Harte. The Church, situated in its commanding position, was the site of an earlier village dating from Roman times. The railway brought rich city businessmen to live in the area, to the evident satisfaction of Cosmo-Bonsor. This coincided with the nation-wide flamboyant and extravagant life style of the rich and aristocratic members of society, which emerged in the Edwardian period after the restraints of the second half of Queen Victoria’s reign. Rightly, perhaps, this period of Chipstead’s evolution only lasted until the outbreak of the First World War, though some aspects of it still persist!

Initially large houses with big gardens, tennis courts, etc., were built along existing roads, especially High Road, Hazelwood, Doghurst and How Lane; to be rapidly followed by the development of new roads such as Hollymead, Bouverie, Walpole Avenue and smaller houses in roads nearer the station; new shops and a petrol pump appeared in the High Rd. The Rectory was moved from Mugswell to a new venue in Elmore Road. The golf, soccer, bowls, rifle and tennis clubs all opened at this time and the Peter Aubertin and Mugswell Mission Halls were built with charitable funds to provide facilities for Parish activities.

Such creative frenetic activities have never been seen since. So what events are happening now at the turn of the millennium that may go down in our history to compare with the past?  Posterity will decide this alone; all we can do is speculate at this stage. Taking some current issues:

What effect will “Localism” and “The Big Society” have on Chipstead?

What lasting effects will the Revs. John Wates and Patrick Bateman have, particularly with the impending construction of the Junior Church in St Margaret’s graveyard?

Will we have large numbers of new “sustainable” houses built on our Green Belt?

Will there ever be a solution to the ever increasing flow of traffic through the village?

Will we even survive as a distinct village, or just meld into the urban sprawl?

The list of questions is endless, but any thoughts about the answers or indeed any other recent potentially history-making events that come to mind would be very interesting to hear.