These local maps show the changing face of Chipstead over the centuries, which should be examined in conjunction with the History section. Full size versions can be downloaded to show more detail. 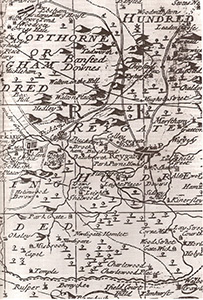 The map of 1720 shows the county of Surrey divided into Hundreds, a demarcation originally intended to represent 100 households. The Reygate (Reigate) and Copthorne Hundreds are shown. The principal roads running south from London passed through Reigate; the present A23 Brighton Road and the A217 to Reigate are shown. Mugswell was then known as Mughole Street and the historic Eyhurst estate is shown. 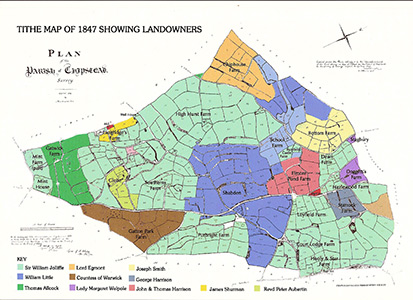 Tithe Map of 1847 showing landowners, farms and the numbering system for individual fields 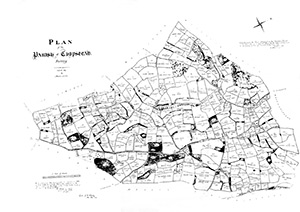 Up to the 19th century in England, tithes (from the Old English for tenth) were a voluntary payment to the local church by farmers and landowners of approximately 10% of the produce the land, normally in the form of agricultural products. Tithes were collected by the Rector of the local church as alms and for payment of his services. In 1836 tithes were commuted into cash payments, and very accurate maps were created for each ‘tithe district’ so that payment could be apportioned.

The 1847 tithe map for the parish of Chipstead shows that most of the land was divided into tenant farms. The largest landowner was Sir William Hylton Jolliffe of Merstham House, whose father bought the Manor of Chipstead in the 1790’s. Jolliffe’s decendents took the title Lord Hylton of Merstham and the farmland known as the Hylton Estate continues to this day.

The Shabden estate with its large mansion and extensive grounds almost down to the Brighton Road dominated the parish. The map cuts off sharply at the northern parish boundary with Woodmansterne so only a fraction of the Stagbury estate along the Chipstead valley is shown. Doggett’s Farm, part of the Stagbury estate, is now Chipstead Golf Club. Elmore Pond Farm was divided into the Elmore and Longshaw estates in the late 19th century.

To the south, at Mugswell around the old Rectory, lay the Glebe, an area of land given to St Margaret’s Church by local landowners for the use of the Rector and his domestic staff. The elder Rev Peter Aubertin restored the old Rectory on this land in 1808 and he, and subsequently his son, lived there for over 80 years. The Rectory is now owned by Harry Hyams, the property tycoon, who is not resident. 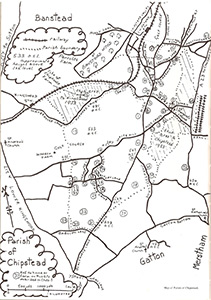 This map shows the location of historically important property within the parish of Chipstead. 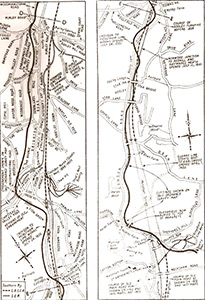 Map showing the southern section of the Surrey Iron Railway

This map shows the southern section of the Surrey Iron Railway between Purley and the Quarry Dene limestone works in Merstham. This horse drawn railway opened in 1803 and ran between Wandsworth and Merstham. It was used to transport building stone from Quarry Dene to the Thames wharf at Wandsworth. It was the world’s first to have iron rails, and passed near Chipstead, roughly following the alignment of the present Brighton Road. 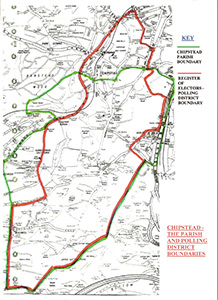